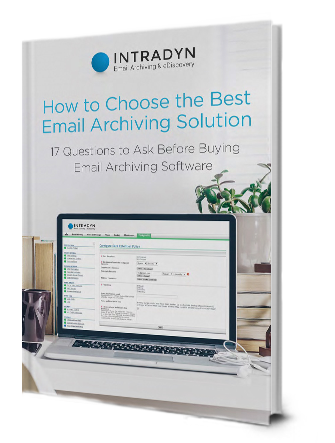 Questions to Ask
Before Buying an Archiving Solution
Get My Copy

Email Archiving: NSA Has Copies of All Your Emails, Why Don’t You? Ever since Edward Snowden leaked the secrets of the NSA, we’ve learned that the covert organization has tabs on a lot more civilian activity than we originally suspected including copies of our emails. Some people have even turned this discovery into a joke about calling the NSA personally to ask for copies of their lost messages. All of this activity begs the question: if the NSA has copies of your electronic correspondence, shouldn’t you?

The NSA has been tracking civilian emails since the Bush administration. Even so, it’s safe to assume that the average business–or person–doesn’t have any emails dating back as far as 2002. It’s time for that to change. Keeping an archive of your emails is important. Corporate email archiving has become the norm. In fact, it’s so pivotal that it is actually required by law in many cases, as any SEC regulated firm is obliged to maintain a searchable, non-editable, and secure archive of all messages. But even if you aren’t obligated to archive your mail, doing so is a smart idea, in the event of any potential litigation.

Dallas law firm, Gardere Wynne Sewell LLC, learned an important lesson in email archiving when they had to pay a $1.2 million settlement in a lawsuit after they were unable to produce subpoenaed records for a former client. Some of these records were dated as far back as 1998. Maintaining logs of all interactions can protect your business in situations like this, as well as in event of customer complaints, and other possible implications.

Archiving your emails isn’t only important for legal reasons; it has economical advantages, as well. Email archiving allows you to quickly and efficiently search through all previous communications. It also reduces clutter from your inbox and server, without actually losing any information. Most importantly, archiving your mail offsite permanently removes the risk of data loss, which ultimately means total protection.

Human Resources departments can use email archiving as a beneficial and time-saving tool, also. Email archiving enables them to monitor potential staff-misuse of company email by giving HR the ability to search through the archives in a few simple keystrokes. For instance, if there is a question of employee harassment, HR can easily retrieve all correspondence between involved parties and have digital breadcrumbs to the source of the problem.

Backing up versus archiving

While you may be tempted to just backup your emails, archiving is a much more practical route, since backups do not provide the same ease of use and search-ability for email that comes with a quality archive. Backing up works by saving only a snapshot of the messages, and does not keep them in their original format. If subpoenaed, you’ll need your emails in their original state, which is a complicated and time-consuming process with typical backup. With archiving, it only takes a few steps to retrieve the necessary files in the correct, native form. For these reasons, seemingly inexpensive back-up software actually becomes more costly, because of its limitations and inconveniences, while an email archiving service would quickly pay for itself.

Archiving your business’ email is a smart way to protect yourself from unforeseen legal circumstances, while also providing the additional benefits of peace of mind and value that help you to work more efficiently and productively. Intradyn’s array of solutions makes it simple for businesses to reap the rewards of email archiving.

Azam is the president, chief technology officer and co-founder of Intradyn. He oversees global sales and marketing, new business development and is responsible for leading all aspects of the company’s product vision and technology department.

Questions to Ask
Before Buying an Archiving Solution
Get My Copy